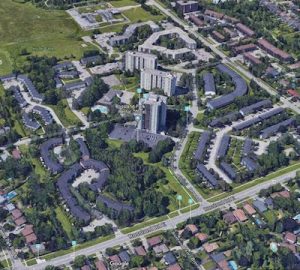 An aerial view of the Rossland Park community in Oshawa.

One of the most distinctive multi-residential rental properties in the Greater Toronto Area has been sold. H. Kassinger Construction, a family-run company which built and founded Rossland Park more than 50 years ago, sold it to Q Management LP for $220 million.

The purchase price, which translates to more than $241,000 per unit, is believed to make this the most lucrative per-unit rental sales transaction ever in Oshawa.

“We really like the property, it suits our strategy perfectly,” said Q Management LP (QMLP) president and CEO Dan Argiros in an interview with RENX. “We are strong believers in Oshawa and this gives us a critical mass in Oshawa now of about 1,400 suites.”

Argiros said QMLP dealt directly with the vendor and the negotiations, due diligence and closing took about six months before the transaction was completed on June 4.

“It took a while to get there but in the end we successfully closed. We are thrilled to have this asset in our portfolio.”

In addition to a community centre with an Olympic-sized pool and ample greenspace, the site includes five acres of parkland complete with woodlot and playground. There are numerous gardens, rock gardens, a fish pond and walking paths.

“Rossland Park is a testament and legacy to its founder, the late Herman Kassinger, whose vision and entrepreneurial spirit enabled him to conceive and complete one of Oshawa’s most prestigious and highly sought-after residential communities,” the Kassinger family said in a statement. “Mr. Kassinger developed Rossland Park with the philosophy of providing good value to tenants, making it ‘a place to call home.’ This philosophy was the result of an extensive research program which gleaned the best ideas from similar communities in Europe.”

Argiros said there was a lot of interest in the property due to its GTA location, its track record with tenants and the level of upkeep.

“When something of this size goes on the market there’s always a lot of people who express interest,” he said. “At the end of the day it took a fair amount of time to get to the close, but it was a process that had a lot of personality involved because it had a lot of pride and joy for the family, for the owner.”

The community was initially conceived in 1965 by Herman Kassinger. It was then built by his H. Kassinger Construction Ltd., which completed Rossland in 1975. Since Kassinger’s death in 2004, the community has been managed by the construction firm.

“They were good managers and they took good care of the site,” Argiros said. “There was a real pride of ownership throughout the whole thing.”

That was immediately apparent when word of the sale reached people on the waiting list for suites at Rossland Park.

“We got a number of calls from people on the waiting list asking if, as new owners, we would honour the wait list that had been established by the previous owner. We obviously said yes,” Argiros said.

“We even rented a suite this morning (June 5) to the first one on the list.”

Argiros said QMLP will apply its standard acquisition formula to the property, making any required upgrades or improvements. Down the road, he said Rossland Park could also be the site of more development.

“The land parcel certainly has some opportunity in it,” Argiros said. “Our approach on these things, and we have a number of other properties with excess land as well, is to get them up and running and purring just perfectly, and then take a look at the infill development opportunity.

“There are a lot of things that have to go into that decision because, by the time you make the decision to go ahead, you’re about three to five years before you actually get a rent cheque. It’s something that’s becoming more important to us as the housing shortage continues.”

Rossland Park is currently home to more than 2,500 residents.

Among its other features are a computer-controlled security system complete with security cameras at numerous locations.

It offers access to city transit, indoor or outdoor parking for residents. Just outside the property are two shopping centres, a grocery store and other local amenities.

QMLP and its property management arm Q Residential own/operate about 11,000 rental units in Ontario. Its properties are in the Greater Toronto Area, (including Oshawa), Ottawa, London, Hamilton and St. Catharines.

“The fund still has substantial capacity for further acquisitions,” said Argiros. “We expect to be making additional acquisitions over the next while.”

Q Residential, a wholly-owned affiliate of QMLP, is providing all property management functions for Rossland Park. 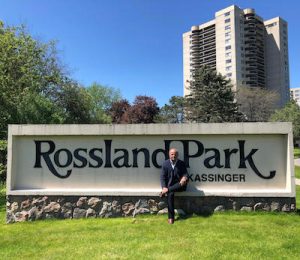 “There aren’t too many single deals done in the $200 millions in Canada,” SVN Rock Advisors chief executive officer and broker of record Derek Lobo told RENX. “It’s a benchmark deal for that reason, and I think it’s a benchmark deal given the calibre of the property.”

“There was quite a bit of interest from a variety of buyers. It wasn’t fully broadcast to the market, but there were a number of interested parties,” Avison said.

“As time goes on, fewer and fewer of these transactions will occur because, once these properties sell to an institution, they typically don’t come back into the market again,” said Lobo. “It’s the kind of asset that you can buy and keep.

“It’s one that you can improve upon. A lot of these older buildings have excess land because they were built to a different density.”

** This article originally appeared on RENX.ca by Don Wilcox – Steve McLean contributed background and interviews to this story.