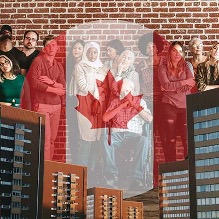 My family moved to Canada in 1966 when I was eight years old. My Dad was 45, Mom was 39, and I was the oldest of five children at the time. My parents found us a good quality, affordable three-bedroom rental townhome – 21 Potsdam Road in North York, Unit 43 – and we lived there for our first year in this new country.  We were new to Canada, its culture, and everything that comes with it, and housing was critical to our foundation as new Canadian residents. Second most importantly, my father found a good job and probably third most importantly, we were enrolled in a good public school (St Wilfrid’s). Our first 5 years were stable! We became contributing Canadians! We had found a new home.

I can’t say for certain but sometimes I wonder – if we hadn’t been given that good start, would my life and my siblings’ lives have turned out the way they did?

Fast forward 55 years and I don’t know if newly arriving immigrants in Canada have the same opportunities available to them. Sure, when it comes to employment, schools, and government services, they will hopefully find these. But the lack of rental supply and the high price of housing across Canada is likely having a detrimental effect on new families arriving in Canada. What I’m trying to point out here is that our affordable housing crisis is not just a short-term problem, but one that could lead to long term effects in our society.

I have previously written on this subject right after the recent election (https://renx.ca/otoole-singh-trudeau-miss-mark-affordable-housing/) and I feel that if we want immigrants to be contributing, successful citizens, they need to get off on the right foot when they arrive here. Affordable and good quality housing is one key way that we can ensure this happens.