Lowest Concentration of Apartments in the City 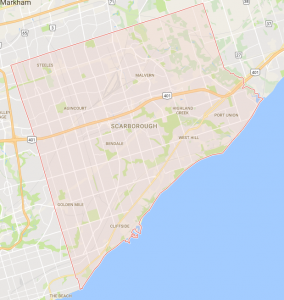 Scarborough has been struggling with poverty and unemployment. Six of the city’s priority neighbourhoods are found here, from Steeles-L’Amoreaux in the northwest, Malvern in the northeast, Dorset Park, Eglinton East-Kennedy Park and Kingston-Galloway in the centre and Scarborough Village in the southeast.

Scarborough suffers from being far from Toronto’s downtown core, with inconvenient transportation access. Residents have long complained about a lack of rapid transit but plans to build LRTs along Sheppard Avenue and on Eglinton East and Morningside have been shelved in favour of a proposed extension of the Sheppard subway that has not yet been funded.

An exception to this picture is north Scarborough. This may change if the Sheppard subway is extended into Scarborough, allowing intensification to occur along the Sheppard corridor.