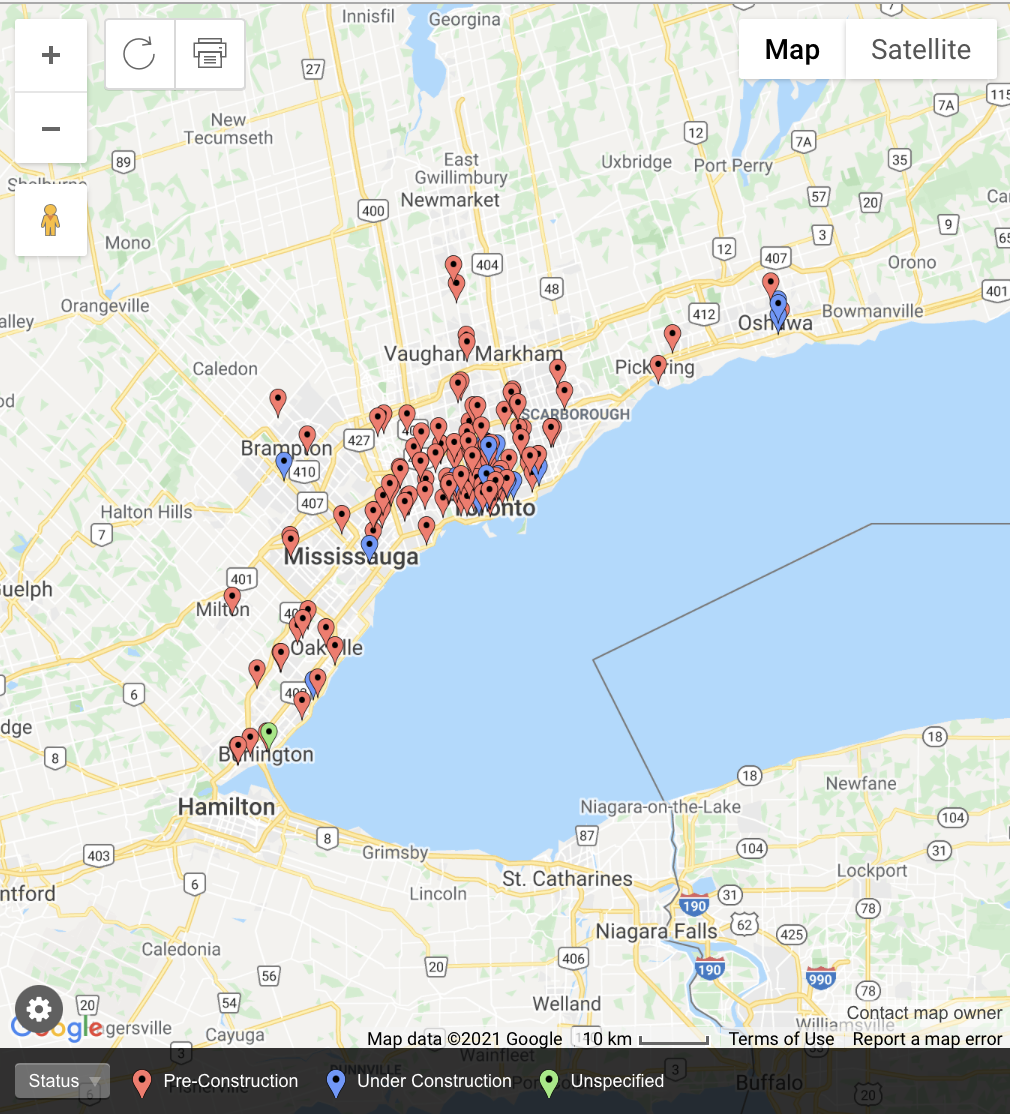 Apartment Crane Watch is an online map and database which details apartment building projects that are under proposal or under construction in the City of Toronto. Users can click on pinned locations on the map to bring up additional details including the address, number of units, number of stories, building form and status.

“(The system) allows us to understand who are . . . entering into the rental market arena,” said Sally Turner, SVN Rock’s Director of Research and Consultancy. “It strengthens our feasibility work because it allows us to track the development pipeline. . . . So, how many new units are likely to enter the market during the next year, two years, three years, four years?”

SVN Rock Advisors is an Ontario-based commercial real estate and consulting company that focuses exclusively on the apartment sector.

Call our Research Team for more information on new developments in the pipeline!

The Apartment Crane Watch map and database shows that while there are dozens of proposed, or pre-development projects spread across the City of Toronto, there are just 12 new rental apartment buildings under construction. Those projects include a total of 3,171 units with an average building height of 23.6 stories and an average of 264 units per building.

“It just takes time and effort and resources to go through each and every one to identify the scale of the projects — so, what’s being built specifically by who, and where it is in the development process,” Turner told RENX.

“There is huge interest in purpose-built rental at the moment within the development community,” Turner said. “If you had looked at development applications even five years ago, you would not have seen this volume of proposed rental development. A lot of it would have been condo instead.”

“The return on investment for condos has shrunk significantly over the past couple of years,” she said.

However, 12 projects under construction remains a relatively low number given the high demand for rental housing in Toronto and the interest from developers.

“That’s pretty low for a large city like Toronto,” Turner said. “It just shows us that the historical backlogs in planning to approve rental development are still in place.”

Many developers have been consulting with SVN Rock Advisors about how to transition from condo to rental development.

“They are seeing rental as a more viable option than condo,” she said.

“We were just kind of hitting a stride (building more apartments) a couple of years ago when the (Kathleen) Wynne government introduced new rent control legislation, which has now been reversed,” Turner said. “What you’re seeing here is now a growing tidal wave of purpose-built rental that really began in the early 1990s.

She said the Apartment Crane Watch will remain online as a permanent resource and her team will be adding more markets in Ontario and across Canada to the system in coming months.

“I would say in the next six months we’ll be able to roll it out across other major markets in Canada.”